During my 4-year college-stay in California, I adopted a mutt from the San Diego Animal Shelter. Everything started with him. I was approached so often about him looking like a movie-dog, that eventually I thought „Why not?“. I found the animal acting agency Hollywood Paws in Los Angeles, went to the next casting with Kio, and we were allowed to participate in the program. There I learned dog training; how to teach and condition commands, diverse tricks and behavior-chains through the help of the clicker and positive reinforcement. This program also included that Kio and I pass the Canine Good Citicen (CGC) Exam, and I was encouraged to train Kio to be a therapy dog. There upon we visited UCSD Medical Center and helped and brightened up patients. 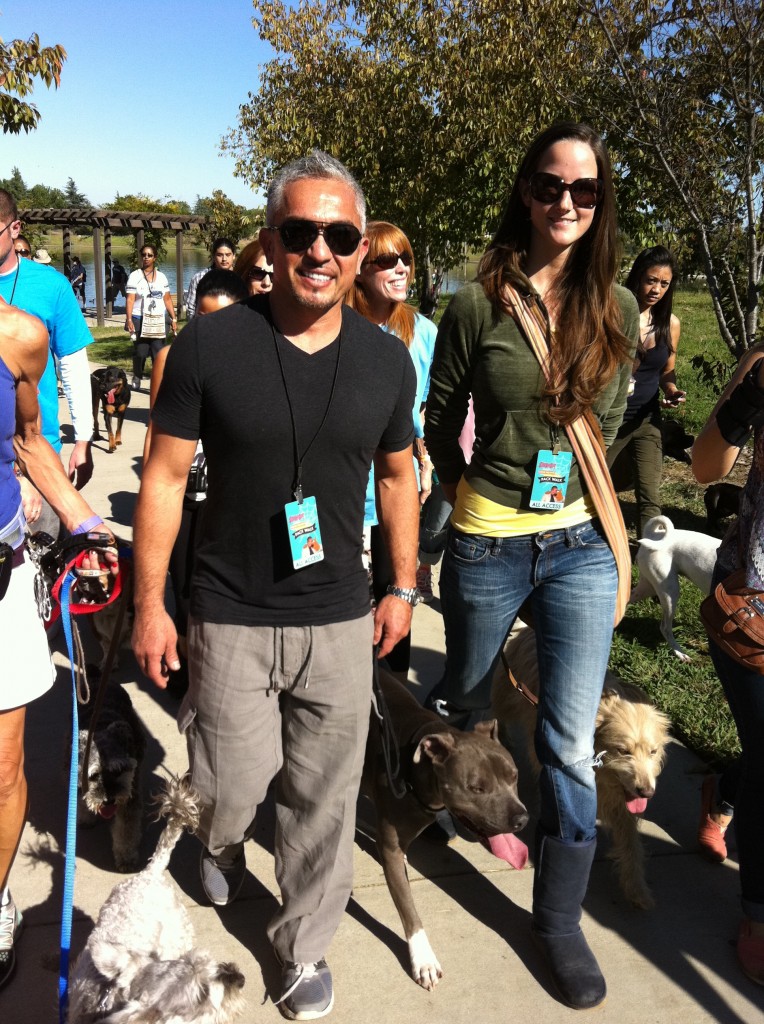 Since I spent all my free time learning about dog training, I stumbled upon „Dog Psychology„, the philosophy of Cesar Millan. It opened my eyes. I thought, and still think today, that it is much more beneficial and more satisfying to help people and their dogs to have a beautiful, peaceful life together, than to teach dogs some tricks for our entertainment. Yes its fun and is great to mentally challenge a dog, but its not everything. Before Cesar Millan started giving courses at his Dog Psychology Center near Los Angeles, I read and watched all his work and started collecting experiences with Kio and foster dogs. Then, in February 2013, I could finally visit my first course, where I experience and learn Cesar’s philosophy „live“. I participated in another course in December 2013. Both times were extremely valuable experiences and learning-moments. In September 2014, December 2015, February 2017 and April 2018 I had the honor of helping and supporting him at some of his Live-Shows during his Europe-Live-Tours. In May 2015 and January 2016 I was invited to volunteer at the dog psychology centers during his seminars.

What he teaches are not methods and techniques. He teaches a philosophy, a way of thinking, a lifestyle – of balance and leadership, like we can observe in nature.

I also help out at the veterinary practice Tierarztpraxis Herzogpark in Munich. There as well I have made, and keep collecting, useful and valuable experiences.

By now, I cannot imagine doing anything else except for helping to create understanding, insight, trust, and respect between people and dogs. Through our mostly unconscious humanization of dogs, and rational way of thinking, we create many misunderstandings, and don’t respect and fulfill the nature of the dog.

EVERY dog deserves the chance to a life-long home and fulfilled life. EVERY person that has contact to dogs needs an understanding of the dog’s behavior, and the skills to handle a given situation. Only then can they influence a dog’s behavior beneficially.

Eine Antwort auf About Me